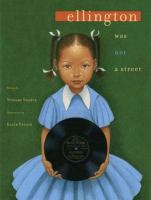 A close-knit group of Black innovators formed their own community in the early to mid-twentieth century. These men of vision lived at a time when the color of their skin dictated where they could live, what schools they could attend, and even where they could sit on a bus or in a movie theater.

Yet in the face of this tremendous adversity, these dedicated souls and others like them not only demonstrated the importance of Black culture in America, but also helped issue in a movement that changed the world. Their lives and their works inspire us to this day and serve as a guide to how we approach the challenges of tomorrow.

At once personal and universal, Shange's poem, "Mood Indigo" (published in her 1983 poetry collection, A Daughter's Geography), serves as the narrative for this elegiac tribute to a select group of African-American men who made important contributions to 20th-century culture. Nelson (Big Jabe) ingeniously sets the events in the home of the narrator, depicted as a curious, winning girl in oil paintings that strongly evoke the period and mood as the renowned visitors start to gather in her convivial, well-appointed house. Presented without punctuation, apostrophes or capital letters, the affectingly wistful verse flows freely and lyrically: "it hasnt always been this way/ ellington was not a street," it begins. Paul Robeson hangs his hat on a coat rack, emphasizing the man's larger-than-life presence and tall, athletic stature ("robeson no mere memory") while "du bois walked up my father's stairs" with the aid of a cane. Nelson conveys the learned man's advancing years but, once seated on the couch, Du Bois exudes wisdom and dignity. The volume culminates in a group portrait of Duke Ellington, percussionist Ray Barretto, jazz great Dizzy Gillespie and Dr. Kwame Nkrumah, former president of Ghana, among others; this collective image drives home the point that these legendary figures were contemporaries who defined an era. Brief concluding biographical sketches tell readers more about these engaging personalities and may well lead to further reading. This is truly a book for all ages, lovely to behold and designed to be revisited. All ages. (Jan.) (c) Copyright PWxyz, LLC. All rights reserved

Ntozake Shange was born Paulette Linda Williams in Trenton, New Jersey on October 18, 1948. She received a bachelor's degree from Barnard College in 1970 and a master's degree in American studies from the University of Southern California in 1973. She adopted her African name while in graduate school.

She wrote 15 plays, 19 collections of poetry, six novels, five children's books, and three essay collections. Her choreopoem, For Colored Girls Who Have Considered Suicide/When the Rainbow is Enuf, opened on Broadway in 1976 and received an Obie Award. She also received an Obie in 1981 for her adaptation of Bertold Brecht's Mother Courage and Her Children. Her trilogy, Three Pieces, won the Los Angeles Times Book Prize for Poetry in 1981. She died on October 27, 2018 at the age of 70.