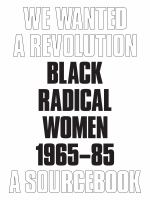 A landmark exhibition on display at the Brooklyn Museum from April 21 through September 17, 2017, We Wanted a Revolution: Black Radical Women, 1965-85 examines the political, social, cultural, and aesthetic priorities of women of color during the emergence of second-wave feminism. It showcases the work of black women artists such as Emma Amos, Maren Hassinger, Senga Nengudi, Lorraine O'Grady, Howardena Pindell, Faith Ringgold, and Betye Saar, making it one of the first major exhibitions to highlight the voices and experiences of women of color. In so doing, it reorients conversations around race, feminism, political action, art production, and art history in this significant historical period.

The accompanying Sourcebook republishes an array of rare and little-known documents from the period by artists, writers, cultural critics, and art historians such as Gloria Anzaldúa, James Baldwin, bell hooks, Lucy R. Lippard, Audre Lorde, Toni Morrison, Lowery Stokes Sims, Alice Walker, and Michelle Wallace. These documents include articles, manifestos, and letters from significant publications as well as interviews, some of which are reproduced in facsimile form. The Sourcebook also includes archival materials, rare ephemera, and an art-historical overview essay. Helping readers to move beyond standard narratives of art history and feminism, this volume will ignite further scholarship while showing the true breadth and diversity of black women's engagement with art, the art world, and politics from the 1960s to the 1980s.

Published by the Brooklyn Museum and distributed by Duke University Press

Published on the occasion of an exhibition organized by the Brooklyn Museum and on view at the museum from April 21-September 17, 2017.

Despite the double burden of racism and sexism during second-wave feminism, women of color developed a rich tradition of activism that still resonates. This book builds a scaffold of ideas that talk back to the landmark exhibition of the same name, originally organized in 2017 at the Brooklyn Museum. During 1965-85, writers, artists, cultural critics, and art historians illuminated marginalized conversations around race, gender, politics, art, and beauty. Each contribution from this deep well of voices, images, and experiences is a source of strategic inspiration. The book features republished works from individuals such as Faith Ringgold, Audre Lorde, Toni Morrison, bell hooks, and Mary Ann Weathers and collective narratives from the Combahee River Collective, the Third World Women's Alliance, and AfriCOBRA, creating a rare, raw, and ageless symphony. Though these stories were foreign to many then, today they breathe life into what is considered more than a response to the racism of the feminist movement and sexism of the Civil Rights Movement; theirs was a mission to carve out a permanent place of their own. The addition of black male voices creates an affirming lens into the political matrix of patriarchy. This unsurpassed collection is an excellent resource for students, educators, and enthusiastic artists. Summing Up: Highly recommended. All levels/libraries. --Amy O Yeboah, Howard University

Catherine Morris is Sackler Family Senior Curator for the Elizabeth A. Sackler Center for Feminist Art at the Brooklyn Museum, the editor of "Workt by Hand": Hidden Labor and Historical Quilts (2013), and coeditor of Materializing "Six Years": Lucy R. Lippard and the Emergence of Conceptual Art (2012) and Judith Scott--Bound and Unbound (2014).