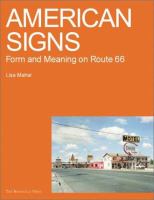 The roadside sign has become an American icon: a glowing neon symbol of the golden age of the open road. Yet signs are complex pieces of design, serving not only as physical markers but also as cultural, political, and economic ones. InAmerican Signs, Lisa Mahar traces the evolution of motel signs on Route 66 in a distinctive visual approach that combines text, images, and graphics. American Signsreveals the rich vernacular traditions of motel sign-making in five eras, spanning from the late 1930s through the 1970s. The motel signs of the early 1940s, for instance, reflect vernacular traditions dating back at least a century, while examples from the later years of the decade reveal a culture newly obsessed with themes. America's fascination with newness and technological progress is manifested in 1950s motel signs. Finally, in the 1960s, a turn toward simplicity and the use of new, modular technologies allowed motel signs to address the needs of a mass society and the beginnings of a national, rather than regional, aesthetic for motel signs.

Lisa Mahar is a cofounder and partner in the New York architecture and design firm MAP. Her first book, Grain Elevators , won the AIA International Book Award. Mahar is the recipient of the Design Arts Awards from the National Endowment for the Arts and the New York State Council on the Arts and is a winner of the ID Magazine Graphic Design Honor Award.