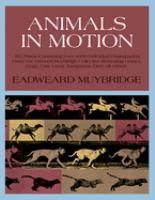 "The dry plate's most spectacular early use was by Eadweard Muybridge." -- Life
"A really marvelous series of plates." -- Nature (London)
"These photographs have resolved many complicated questions." -- Art Journal
Here is the largest, most comprehensive selection of Muybridge's famous animal photos -- more than 4,000 high-speed shots of 34 different animals and birds, in 123 different types of actions. Animals are shown walking, running, leaping, flying -- in typical actions. The horse alone is shown in more than 40 different ways: galloping with nude rider, trotting, pacing with sulky, cantering, jumping hurdles, carrying, rolling on barrels, and 36 other actions. All photos taken against ruled backgrounds; most actions taken from 3 angles at once: 90 degrees, 60 degrees, rear. Foreshortened views are included.
These are true action photos, stopped in series, taken at speeds up to 1/2000th of a second. Actions are illustrated in series, with as many as 50 shots per action. Muybridge worked with the University of Pennsylvania for three years, made more than 100,000 exposures, and spent more than $50,000. His work has never been superseded as a lifetime reference for animators, illustrators, artists, and art directors.

"... contains a selection of plates from the eleven-volume work, 'Animal locomotion', first published in 1887".