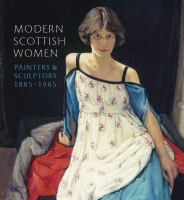 This revelatory book concentrates on Scottish women painters and sculptors from 1885, when Fra Newbery became Director of the Glasgow School of Art, until 1965, the year of Anne Redpath's death. It explores the experience and context of the artists and their place in Scottish art history, in terms of training, professional opportunities and personal links within the Scottish art world. Celebrated painters including Joan Eardley, Margaret Macdonald Mackintosh and Phoebe Anna Traquair are examined alongside lesser-known figures such as Phyllis Bone, Dorothy Johnstone and Norah Neilson Gray, in order to look afresh at the achievements of Scottish women artists of the modern period. The book accompanies a show which will be held at the Scottish National Gallery of Modern Art Two in Edinburgh from 7 November 2015 to 26 June 2016. AUTHOR: Alice Strang joined the National Galleries of Scotland in 1999 where she is now a Senior Curator at the Scottish National Gallery of Modern Art. She has curated many key touring exhibitions and contributed to accompanying publications. These include: Winifred Nicholson in Scotland (2003), Consider the Lilies: Scottish Painting 1910-1980 (2006), From Sickert to Gertler: Modern British Art from Boxted House (2008), The Scottish Colourist Series (F.C.B. Cadell, S.J. Peploe and J.D. Fergusson) (2010-14). 100 colour illustrations