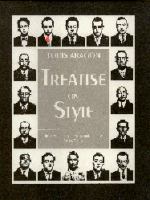 Surprising juxtapositions like goats spread across pianos and fearful optical illusions like eyeballs being sliced characterized the surrealistic movement in the arts in 1928 when Louis Aragon published Trait#65533; du Style in Paris. Aragon had become ever more contemptuous of vogues and pretensions. In the name of surrealism, he produced the first significant critique of it. Instead of merely upsetting old relationships and skewering sensibilities, Trait#65533; du Style was meant to shock with a capital S, and it did. Only now has it been completely translated into English. Although time has attenuated the scandalous nature of Aragon's language, his criticism has lost none of its edge in this translation by Alyson Waters.

From the beginning, which describes a postcard showing a little boy on a potty as representative of French humor and the French spirit, to the end, an attack in scatalogical language on the French military establishment, Aragon zeros in on one target after another. Nothing escapes his notice or venom--whether it is the masturbatory output of contemporary writers, the prostitution of culture, or the perversions of government.

Still, Treatise on Style is more than a brilliant diatribe directed against what Aragon perceived as the moral, political, and intellectual failures of his time. He proposes surrealism, in art as in life, as a means to achieve a valid ethical and aesthetic "style." Surrealism, as Aragon defines it here, loses some of its mythical and mystical trappings; it becomes inspiration with rolled-up shirt-sleeves. He exercises this faculty in his own writing, which aims to shake readers out of their complacency by alternating the intensely lyrical with the borderline obscene and juxtaposing the language of the educated elite with that of the street. Whether denouncing religious fantacism or dispensing praise, Aragon remains true to his idea of the surrealist project: to reclassify certain values through the act of writing itself. Treatise on Style entertains as a portrait of a movement and of a personality who kept moving.

This is a thoughtful translation of Aragon's Traite du Style , which originally appeared in 1928 at the confluence of Aragon's surrealist and Communist beliefs. In this brief work, Aragon takes on many of the big topics: religion, art, journalism, criticism, suicide, humor, language, Rimbaud, Freud, and so forth. All this acts as a prolog to the titular question of style, treated in the final quarter of the book. Without directly addressing the issues of style in surrealist literature and life, Aragon nonetheless explicates the genre. His diatribe involves wordplay and juxtapositions that are more surrealist than political, as subjective and opinionated as possible, and a great pleasure to read. Treatise on Style is essential for literature collections.-- Janice Braun, Medical Histori cal Lib., Yale Univ. (c) Copyright 2010. Library Journals LLC, a wholly owned subsidiary of Media Source, Inc. No redistribution permitted.

Surrealism was a literary, artistic, and social expression of revolt against traditional systems of values that had been shaken by the carnage and chaos of WW I. Written in 1927, Treatise on Style reflects the evolution of Surrealist Louis Aragon from literary rebel to Communist activist. His aim was to scandalize the bourgeois establishment through obscene, bitterly extreme attacks on its political and cultural life. Yet, these insults only weaken the revolt of Surrealism's earlier years. Flaubert, Gide, Val'ery, Claudel, and others are ridiculed here. Their works, however, have become classics while Aragon's have been relegated to a lower shelf. His colleague Andr'e Breton (Manifeste du surr'ealisme, 1924) gives one a positive reason for literary rebellion, and his haunting Nadja, (1928) illustrates the Freudian subconscious stimulus of dreams in the creative process. Dali and Mir'o translate this to painting. But Aragon has little to say beyond outrageous polemics against "morons, vermin, sewer rats and slime." This first full English version clearly conveys the venom of the original. It may be of interest to students of Surrealism and the diatribe that sometimes tarnished its worth.-J. C. McLaren, University of Delaware

Louis Aragon was born in Paris, France. He had a varied professional life that included experimentation with numerous writing styles. Initially planning on a career in medicine, Aragon studied at the University of Paris. During World War I and World War II, he was mobilized as an auxiliary doctor.

Dadaism and surrealism influenced many of his early works, including Nightwalker. In 1919 he co-founded the Surrealist magazine Literature, but he soon broke away from dadaism and surrealism and joined the Communist Party. Among his best-known works are Residential Quarters and The Bells of Basel, which reflect this Communist influence. His later works, such as Holy Week (1958), seem to turn away from some of his more controversial ideas. In the 1940s Aragon reintroduced rhyme in his work and was interested in ideas of automatic writing and freedom of the unconscious.