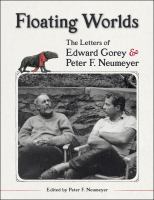 Edward Gorey and Peter Neumeyer met in the summer of 1968. Gorey had been contracted by Addison-Wesley to illustrate ¿Donald and the¿,¿ a children¿s story written by Neumeyer. On their first encounter, Neumeyer managed to dislocate Gorey¿s shoulder when he grabbed his arm to keep him from falling into the ocean. In a hospital waiting room, they pored over Gorey¿s drawings for the first time together, and Gorey infused the situation with much hilarity. This was the beginning of an invigorating friendship, fueled by a wealth of letters and postcards that sped between the two men through the fall of 1969. Those letters, published here for the first time, are remarkable for their quantity and their content. While the creative collaborations of Gorey and Neumeyer centered on children¿s books, they held wide-ranging interests; both were erudite, voracious readers, and they sent each other many volumes. Through their discussions of these books, one marvels at the beauty of thoughtful (and merry) discourse driven by intellectual curiosity. The letters also paint an intimate portrait of Edward Gorey, a man often mischaracterized as macabre or even ghoulish. His gentleness, humility, and brilliance¿interwoven with his distinctive humor¿shine in each letter; his deft artistic hand is evident on the decorated envelopes addressed to Neumeyer, thirty-eight of which are reproduced here.

Beginning in 1968, Neumeyer and Gorey collaborated on several children's books, including Why We Have Day and Night, Donald and the ..., and Donald has a Difficulty. In this beautiful volume, printed on heavy paper with numerous illustrations and black and white and color photos, Neumeyer shares his and Gorey's lengthy correspondence during this time. The letters are notable for the clear rapport that these creative individuals found, with discussions of projects, favorite books, travels, and daily life, and offer a window into the creative process. Readers will be privy to good and bad days for both men. Neumeyer has included not only photos of himself and Gorey, but photos of their letters, as well as envelopes and postcards that Gorey illustrated, Gorey's illustration lists for books, and illustrations reproduced from the books. The letters invite readers to slow down and peruse the meanings of friendship, communication, and art. (Sept.) © Copyright PWxyz, LLC. All rights reserved.