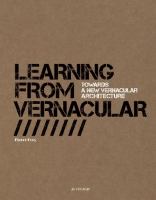 In 1964, Bernard Rudofsky curated the exhibition Architecture Without Architects at The Museum of Modern Art in New York, thereby drawing the attention of the postwar Western public to traditional architectures, rescuing them from the ignominy to which they had been consigned by the 'national' ideologies of Europe in the 1930s. In the early 1980s, Ivan Illich published a number of radical critiques of modernity in which he drew attention to 'vernacular' values, proposing a trenchant but hospitable definition of this term. It derives from Roman law, in which everything produced within the household for consumption within the household and not for sale or exchange is vernacular. In order to locate this proposition within the field of architectural criticism, this book borrows with ironic intent part of the title of Robert Venturi's celebrated work, Learning from Las Vegas (1977), which launched the fashion for post-modernism in architecture. Taking advantage of a collection of maquettes of vernacular architecture (the only one of its kind in the world), whose special attributes he highlights and whose value he underlines, the author selects contemporary realisations by architects from Africa, Asia, America and Europe that seem to him to constitute a 'new vernacular architecture'. The emphasis here is on materials available on the fringes of the market, on the safeguarding and development of traditional know-how, on the social role of the architect and on the teaching of architecture.

Publ. to coincide with the exhibition of the same name, by EPFL; ACAAT, Vitra Design Museum: 5 June - 4 October 2009,

Vernacular architecture , born in SITU and fashioned by local constraints, is more contextual by definition. The fact that it arises out of what is permanent rather than from a given event is precisely its strength and its fragility.