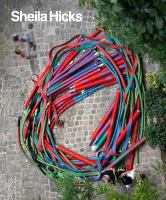 Sheila Hicks (born 1934) is a pioneering artist noted for objects and public commissions whose structures are built of color and fiber. This volume accompanies the first major retrospective of Hicks's work; it documents the remarkable versatility and dramatically divergent scale of her textiles as well as her distinctive use, and surprising range, of materials. Hicks deliberately and provocatively engages what are often considered mutually exclusive domains, rethinking and pushing the limits of generally accepted contexts, conditions, and frameworks. These include distinct objects and temporal, performative actions; studio works and commissions for public buildings; and textiles made in artisanal workshops as well as for industrial production in places as different as Chile, France, Germany, India, Japan, Mexico, Morocco, Sweden, and the United States.

Three essays analyze the progression of Hicks's art and technique and her many modes of working. Among other topics, they examine the artist's relationship to the "expanded fields" of the "new sculpture" and the "new tapestry" beginning in the 1960s, the reclamation of craft as subject and technique for artists in many media, the integrated influences of international cultures, and the aesthetic, pedagogical, conceptual, and historical framework from which Hicks's work has developed. This publication reveals the full extent of Hicks's work, from exquisite miniature weavings to major sculptural pieces to such large-scale commissions as The Four Seasons of Fuji. Exquisitely designed and lavishly illustrated, this book demonstrates that Hicks's pioneering work with textiles has embraced yet reinvented tradition, successfully navigating the terrain between art, design, and architecture.

Published in conjunction with her first museum retrospective, held at the Addison Gallery of American Art in 2010, Sheila Hicks: 50 Years engages readers well beyond the usual exhibition publication. Through three essays and more than 200 color and black-and-white images, the book clearly documents the artist's conceptual range, innovative use of materials (specifically fibers and textiles), and multicultural influences and emphasis. The essays look at Hicks's early influences while at Yale, particularly that of Josef Albers; the importance of travel, especially to Central and Latin America, for her artistic explorations and concepts; and her role in helping transform fiber into a formally recognized artistic medium. This publication explores Hicks's involvement with architectural spaces and large commissions, including site-specific images of sculptural and installation pieces as reference. Simon (independent scholar) and Faxon (Addison Gallery) have produced a volume that is exceptional both in its focus on Hicks's artistic development and its examination of her work in a broader art context. The collection finishes with a chronology containing additional personal images, the Addison's exhibition checklist, the artist's exhibition history, and a selected bibliography, giving serious scholars a base for further research. Summing Up: Essential. Lower-level undergraduates through faculty/researchers; general readers. L. L. Kriner Berea College

Whitney Chadwick is Professor of Art at San Francisco State University. She has lectured and published widely in the areas of surrealism, feminism, and contemporary art. She lives in San Francisco, California.