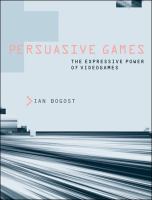 An exploration of the way videogames mount arguments and make expressive statements about the world that analyzes their unique persuasive power in terms of their computational properties. Videogames are an expressive medium, and a persuasive medium; they represent how real and imagined systems work, and they invite players to interact with those systems and form judgments about them. In this innovative analysis, Ian Bogost examines the way videogames mount arguments and influence players. Drawing on the 2,500-year history of rhetoric, the study of persuasive expression, Bogost analyzes rhetoric's unique function in software in general and videogames in particular. The field of media studies already analyzes visual rhetoric, the art of using imagery and visual representation persuasively. Bogost argues that videogames, thanks to their basic representational mode of procedurality (rule-based representations and interactions), open a new domain for persuasion; they realize a new form of rhetoric. Bogost calls this new form "procedural rhetoric," a type of rhetoric tied to the core affordances of computers- running processes and executing rule-based symbolic manipulation. He argues further that videogames have a unique persuasive power that goes beyond other forms of computational persuasion. Not only can videogames support existing social and cultural positions, but they can also disrupt and change these positions themselves, leading to potentially significant long-term social change. Bogost looks at three areas in which videogame persuasion has already taken form and shows considerable potential- politics, advertising, and learning.

In this wide-ranging, theory-rich follow-up to his Unit Operations: An Approach to Videogame Criticism (2006), Bogost (Georgia Institute of Technology) explores the persuasive, expressive potential of video games in politics, advertising, and education. He asserts that because games are process-based representations of specific political, social, and cultural systems, their persuasive potential extends beyond traditional verbal and visual rhetoric. Since video-game rules construct procedural arguments about the way systems work in the material world, their procedural rhetoric encourages critical perspectives on such systems. Bogost points out that video games are opportunities to involve players in particular issues, ideas, and contexts because of their procedural construction of human subjectivity. Thus "persuasion" is not the manipulation of an audience, but a call to engage critically with institutional, corporate, and political systems. This book's ambitious coverage detracts somewhat from its coherence, and Bogost's vague definition of "game" (which he asserts clearly in Unit Operations) neglects McKenzie Wark's attention to competition in Gamer Theory (CH, Nov'07, 45-1296) and lacks the rigor of Katie Salen and Eric Zimmerman's comprehensive review of the term in Rules of Play (2003). But Bogost successfully challenges reductive claims regarding the behaviorist effects of gameplay, thus fundamentally evolving video game criticism. Summing Up: Essential. Lower-division undergraduates through faculty and professionals. J. A. Saklofske Acadia University

Ian Bogost is Ivan Allen College Distinguished Chair in Media Studies and Professor of Interactive Computing at the Georgia Institute of Technology, a Founding Partner at Persuasive Games LLC, and the coauthor of Newsgames- Journalism at Play (MIT Press, 2010).