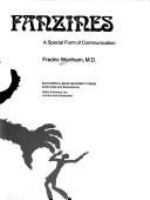 There are well over 200 fanzines in current distribution, originating in almost every state in the U.S. as well as in Canada, England, Germany, Ireland, Spain, and Sweden. This is the first book about them.Few persons outside the science fiction field (where, historically, fanzine publication appears to have begun) know the meaning of the portmanteau word, fanzine (amateur fan plus magazine).Fanzines are published, written, and illustrated by young persons, usually well under 30, and bear such names as "ANDROmeda," " BeABohema," " Comickazi," " Granfalloon," " "and "Varolika. "The history of the genre is brief, dating from the 1930s, but many of the publishers and contributors have achieved considerable distinction as writers, including Poul Anderson, Ray Bradbury, and Richard Lupoff.Coming to this serious study of an unusual subject with his considerable expertise in the field of violence, Dr. Wertham has been struck, first, by the nonviolent, creative aspects of the genre and, second, by the amateur status of fanzines. His conclusion, which will surprise many readers, is that herein may lie a message for our unheroic age."

Fredric Wertham, M.D. , is presently consulting psychiatrist at Queens Hos­pital Center, Jamaica, New York City. He was the pioneer in the study of violence, about which he has written many books, including The Show of Violence , A Sign for Cain , and Seduction of the Innocent.