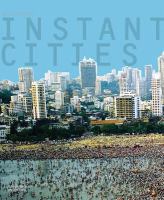 A major new volume that explores and assesses the phenomenon of the contemporary metropolis. With building space throughout the world at a premium and environmentally-sound development of tremendous importance to the future of the planet, Instant Cities looks ahead to creative, forward-thinking and possibly fanciful notions of the city such as biospheres, space stations and virtual realities. Touching on the historical context of humanity's earliest settlements in the ancient world, Instant Cities focuses on the development of the concept of the city and how it has been expanded to include sites from shopping malls to prisons, as well as various 'micro' communities within society. Today, over 60 per cent of the worlds' population live in cities which means that it is crucial that we comprehend the urban phenomenon, in order to adapt, develop and plan for the future and to fully understand contemporary society.

Instant Cities analyses the current stratospheric rise of the city, looking at global megacities from the first to the third world, such as Frank Lloyd Wright's Broadacre City, Milton Keynes in the UK, Lakewood, CA, Brasilia and its satellite towns, Bangalore, India's Silicon Valley, and Pudong, Shanghai.