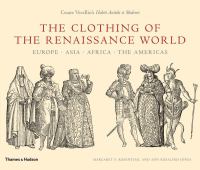 A tour de force of scholarship and book production: an essential reference for anyone interested in costume history, Renaissance studies, theater, and ethnography.


The Venetian Cesare Vecellio's two books on the costumes of the known world were hugely popular and influential in their time, and their lively descriptions and vivid illustrations have captivated readers ever since. This is the first time that the entire first edition of 1590, along with the New World section from the 1598 second edition, have been translated and published with their original woodcuts.

Here we rediscover the world as seen in the sixteenth century. Beginning with the dress of the inhabitants of Venice--from the grandest doge to the humblest porter--Vecellio's project quickly grew to include all of Europe, Africa, Asia, and the Americas. Like his contemporaries, Vecellio assumed that clothing acted as an identifier of rank, yet he also realized, in a very modern way, that fashion was constantly changing, crossing borders, and transforming the way people lived.

All the woodcuts are reproduced full size and accompanied by Vecellio's commentaries on each costume. An extensive, illustrated introduction by two of the world's leading experts on Renaissance literature and culture offers the most thorough context possible, complete with additional color illustrations: portraits and sculptures, maps and cityscapes, and details of textiles.

Anyone interested in historical costume probably knows the inexpensive Dover paperback of the classic Vecellio's Renaissance Costume Book (1977) that contains 500 woodcut illustrations of the 16th century, covering most European countries (including Turkey), Africa, Asia, and America. This new edition makes available the same black-and-white images but with the accompanying descriptions translated into English and with interpretation of Vecellio's environment in Venice. While historical clothing and global maps were depicted in many 16th-century illustrated publications, Vecellio's 1698 two-volume work covering ancient and modern styles was by far the most comprehensive. Vecellio, distant cousin of Titian, became the first 16th-century artist/author to embellish his black-and-white images with customs and cultures of faraway places. His commentary on antiquity, variety, and wealth also provided later artists with detailed explanations of clothing cut, fabric, and trim, including headdresses, coiffures, and accessories. Sources were Venetian residents, travelers and diplomats, architectural and sculptural monuments, frescoes and portrait paintings, and living artists, along with ancient writers such as Plutarch and Suetonius. A new glossary of Renaissance costume and fabrics, 77 carefully chosen complementary color reproductions, and lengthy footnotes and bibliography add to this reprinting, which is a collector's treasure and valuable library reference. Summing Up: Essential. All levels/libraries. B. B. Chico Regis University