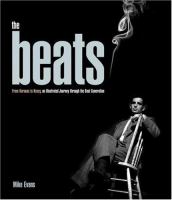 Note: "Selected works": pages 186-187.Includes bibliographical references (page 187) and index. Summary: An overview of the major figures and events of the beat generation from the '40s through the late '60s with photographs and a feast of visual material.
Total reservations: 0

This year marks the 50th anniversary of the publication of On the Road , the defining book of the Beat Generation. Jack Kerouac wrote his masterpiece in one frenzied three-week period in 1951 on the infamous 119-foot scroll, which has been Âon the road" touring the nation since 2004, slated to continue on through spring 2008. The scroll will also be published in its original, unedited version in book form for the very first time in 2007. Tying into the anniversary and the resurgence of the Beat movement in our collective cultural consciousness is our lavishly illustrated book The Beats , a spectacular record of that most explosive period, when the conservative blandness of '50s America gave way to the artistic, social, and sexual liberation of the '60s. With over 200 illustrations, many rarely seen before, the book tells the story of the Beat Generation from its subterranean beginnings in New York and San Francisco to world-wide acclaim. Set against the backdrop of seedy student pads, smoky jazz cellars, and-most crucially-the open road, it's a story of a rebellion that challenged society's attitudes towards sex, drugs, and freedom of speech. Following the turbulent saga of Kerouac, Allen Ginsberg, William Burroughs, Neal Cassady, and the other Beats via reckless love affairs, obscenity trials, murder cases, and press vilification, to media celebrity and the ÂBeatnik" craze that followed, their story represents the evolution of the counterculture from hipsters to hippies. Featuring a wealth of first-hand quotes, archive documentation, and exclusive interview material with Beat wife, muse, and chronicler Carolyn Cassady, The Beats is a timely celebration of a seminal-and often neglected-era in modern popular culture.

An overview of the major figures and events of the beat generation from the '40s through the late '60s with photographs and a feast of visual material.

As a basic literary overview of the major figures and events of the beat generation, Evans's handsome coffee-table book serves its purpose satisfactorily, if not with particular attention to insight or detail. Evans, for example, perfunctorily recounts Kerouac's oft-cited Benzedrine-fueled writing of On the Road with no mention of the fact that most recent publications have downgraded his principal writing aid to coffee. Someone looking for biographical complexity, however, has an ever-growing library of other volumes to choose from; this book's value lies largely in the photographs, original book covers and various other visual elements that enhance nearly every page. Evans does an elegant job of visually charting the beats' trajectory from the intensely personal inner circle of the '40s and mid-'50s to the national praise, misunderstanding and often ridicule that greeted their ideals in the late '50s and '60s. He accomplishes this transition by subtly shifting the bulk of visual material from intimate photos of the principal figures to an expanding network of junk (The Beat Generation Cookbook) and inspiration (the happenings of Claes Oldenberg) that mirrors the mass culture explosion of America through the decades. Color and b&w illus. (Nov.) (c) Copyright PWxyz, LLC. All rights reserved

Mike Evans is an award-winning journalist, television producer, and minister. He has appeared on hundreds of radio and television broadcasts including CNN and speaks throughout the world. His prayer ministry for the Middle East has touched the lives of millions. Mike is also the author of several books including the bestselling "Beyond Iraq". He lives in Texas.