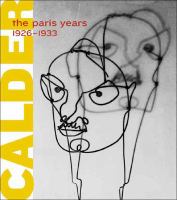 In 1926, Alexander Calder (1898-1976) moved from New York to Paris and began to use time and motion as "materials" for animating line and space. Calder's years in Paris--an understudied part of the artist's career--is the focus of this marvelous publication.

A team of international scholars discusses Calder's many innovations of this period, chief among them his abstract, motorized, and mobile works. They analyze the extended cast of Calder's animated Circus, made in Paris between 1926 and 1931, and include previously unpublished photographs by Brassa#65533; and Kertesz of Calder and this beloved performative sculpture. The essays critically explore the intellectual, cultural, and artistic milieu of Paris in the late 1920s and early 1930s and the contexts of Calder's friendships with Mir#65533;, Mondrian, Duchamp, and Man Ray, among others. What emerges in this fascinating book is a nuanced and detailed understanding of how Calder's distinctive career first took flight.

Published on the occasion of the exhibition at the Whitney Museum of American Art, New York, and Centre Georges Pompidou, Paris.

Calder, who arrived in Paris in 1926 as an Ashcan School realist painter with a degree in engineering, came into his own there as a central figure of the Modern movement. He became known in avant-garde circles for his wire figures and portraits (many represented here), toys and jewelry. Between 1926 and 1931, he built the 70 figures that compose Calder's Circus, which he displayed through 1961. A visit to Piet Mondrian's studio in 1930 provided a shock that started the abstract explorations that led to the mobiles for which he is best known. Simon and Leal, curators respectively at the Whitney Museum of American Art, and the Pompidou Center, collect eight essays in this catalogue for an exhibition opening in October at the Whitney; the writings examine Calder as illustrator, surrealist and abstractionist. His Circus is examined in depth by Eleonora Nagy, its conservator, and Henry Petroski, who looking at Calder's engineering background likens the Circus in performance to the workings of an internal combustion engine. Both art professionals and the artist's many fans will find much to appreciate here. 235 color and 87 b&w illus. (Sept.) (c) Copyright PWxyz, LLC. All rights reserved

This exhibition catalogue by Simon (Whitney Museum) and Leal (Pompidou Centre) presents wonderful works by Calder, one of the 20th century's finest sculptors and one of America's most innovative artists--specifically, works he created during his years in Paris, from the mid-1920s to 1933. At a time when surrealism was firmly established within the visual, cinematic, literary, and musical cultures of Paris, Calder's own inherent love of invention, playfulness, and dialogue with his creative imagination brought forth images and forms that would seed his oeuvre for years to come. Some 250 works, including those in wire and other metals, books and ephemera, drawings and photographs--many related to his famous Circus, mobiles, and all wondrous, fantastic, and joyful--create a magnificent panoply of bursting-forth energies, held together by the master's magic. The catalogue provides excellent reproductions of most of the exhibited works, along with documentary photographs. Fine essays include "The Paris Years," "Calder the Illustrator," "Calder as Artist-Engineer," "The Search for Ubiquity," "Calder's Once and Future Circus," "The Alchemist" (on surrealism), "Parisian Metamorphosis in Four-Acts," and "Painting and Working in the Abstract." Additional material includes a detailed chronology, listing of works in the exhibition, and selected exhibition history. Summing Up: Highly recommended. Modern art collections supporting upper-level undergraduates through faculty/researchers. J. Weidman Nelson-Atkins Museum of Art

Joan Simon is curator at large for the Whitney Museum of American Art. She is the author of William Wegman: Funney/Strange  (Yale), among many other publications on contemporary artists. Brigitte L#65533;al is curator of historic collections at the Mus#65533;e national d'art moderne, Centre Georges Pompidou, Paris, and the author of many books on modern art.