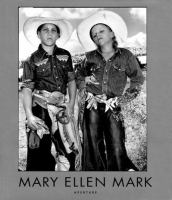 "Mark works in a classic documentary mode: her work imprints itself on viewers in the way that only great photography can." --"Harpers Bazaar"
Recently voted by the readers of "American Photography" as their favorite woman photographer of all time, Mary Ellen Mark has made some of America's most iconic photographs. She is unsurpassed at shaping both the odd and the everyday into genuinely surprising photographs that subtly yet powerfully challenge our preconceptions or intensify our convictions. Mary Ellen Mark's poetic and at times disquieting photographs form a fascinating portrait of a complex, amusing, and occasionally unsettling country and its people.

With a candid intimacy uniquely her own, acclaimed photographer Mark partners with her subjects to make compassionate and complex portraits. By photographing her subjects in their environments, she creates powerful contextual images that make larger comments on the state of affairs in U.S. society. The images span the United States, ranging from Aryan Nations members in Idaho to rodeo workers in Texas, ballroom dancers in Florida, and shelter residents in New York. Also notable are the serial portraits done over years, as with those of Tiny from Seattle (1983-99) and the Damm family (1987-94). This quality collection is an exciting confirmation of Mark's contribution to contemporary photography and will serve both those familiar with her work, as well as newcomers. Mark's 12th book, this first broad survey of her American photographs from the beginnings of her career in 1963 to the present accompanies a major traveling retrospective organized by Aperture opening next month at the Philadelphia Museum of Art. Highly recommended for large public and academic libraries, this is also an affordable overview of her work for small public libraries.--Debora Miller, Minneapolis (c) Copyright 2010. Library Journals LLC, a wholly owned subsidiary of Media Source, Inc. No redistribution permitted.

Mary Ellen Mark (March 20, 1940 - May 25, 2015) was an American photographer known for her photojournalism, portraiture, and advertising photography. She was born in Elkins Park, a suburb of Philadelphia, Pennsylvania. She received a BFA degree in painting and art history from the University of Pennsylvania, in 1962, and a Masters Degree in photojournalism from that university's Annenberg School for Communication, in 1964. The following year, Mark received a Fulbright Scholarship to photograph in Turkey for a year.

Mark had 18 collections of her work published, most notably Streetwise and Ward 81. Her work was exhibited at galleries and museums worldwide and widely published in Life, Rolling Stone, The New Yorker, New York Times, and Vanity Fair. She received numerous awards, including three Robert F. Kennedy Journalism Awards, three fellowships from the National Endowment for the Arts, the 2014 Lifetime Achievement in Photography Award from the George Eastman House and the Outstanding Contribution Photography Award from the World Photography Organisation.