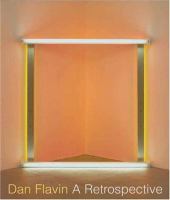 ; Modern Art Museum of Fort Worth

Dan Flavin (1933-1996) is considered one of the most important and innovative artists of the late twentieth century. The simplicity and systematic character of his extraordinary work, along with his relentless exploration and ingenious discovery of an art of light, established him as a progenitor and chief exponent of Minimalism. Uniquely situated outside the mediums of painting and sculpture, the majority of Flavin's work after 1963 consists of art made from light.

This landmark book--the first retrospective publication of Flavin's art since 1969--includes around 45 of the artist's most important light works, beginning with a pivotal series of constructed boxes with attached incandescent or fluorescent lights, called "icons," made from 1961 to 1963. Works spanning Flavin's career are discussed in depth, including examples that integrate light with the surrounding space and show the particular characteristics of blended fluorescent light, large-scale installations, and constructed corridors. The book also includes reproductions of Flavin's drawings, which show his thought processes and working methods.

New scholarship and interpretation of Flavin's work appears in the form of three critical essays by experts, an extensive chronology, comprehensive bibliography, and exhibition history. In addition, Flavin's seminal text "'. . . in daylight or cool white.' an autobiographical sketch," originally published in Artforum in 1965, is included.

Exquisitely designed and produced, with many new stunning color reproductions, Dan Flavin: A Retrospective captures the brilliance of this artist's contribution to and challenges of the art world and will be the authoritative volume on Flavin for years to come.

Published in conjunction with a current exhibition organized by the Dia Foundation and the National Gallery of Art eight years after Dan Flavin's death, these two titles are the first to present an in-depth examination of the artist's life and work. Flavin was a leader among a generation of artists, beginning in the 1950s, who chose to make art with unconventional materials and methods and to make the site in which art was placed integral to its meaning. Flavin's material was simple industrial fluorescent light. Helping to define Minimalism over a period of 30 years, he produced a body of work of exceptional variety despite an intentionally narrow range of options. Flavin's character, ideas, and relationships with critics, curators, mentors, and colleagues are made vivid in these texts. Both titles include a selected exhibition history, chronology, bibliography, and two interviews with the artist, together with a wry and revealing autobiographical sketch Flavin wrote for Artforum magazine. Scholars will be interested in reviewing the methodology behind The Complete Lights cataloging project--the first phase of an effort to develop a complete catalogue raisonné--detailed in Dan Flavin: The Complete Lights. An overview of Flavin's entire career, Dan Flavin: A Retrospective includes all of the essays appearing in The Complete Lights and is an excellent choice for libraries interested in expanding their contemporary American art collections.--Michael Dashkin, Qualcomm, San Diego (c) Copyright 2010. Library Journals LLC, a wholly owned subsidiary of Media Source, Inc. No redistribution permitted. All rights reserved.

This exhibition catalog's primary texts by several writers with long-standing involvements with Dan Flavin and his work offer a wide range of insights into this artist, whose career spanned the last third of the 20th century. Though opposed to being categorized as a minimalist, Flavin was remarkably consistent in his choice of materials. As the texts and illustrations here make clear, literally all of his work was conceived as arrangements of (mostly) fluorescent light fixtures bathing architectural spaces with their colored glow. The essayists convey the kinds of decisions that go into such works, the artist's motivations, and the history of Flavin's career and those who supported it. Given the ephemeral nature of such installation work, the analyses work best when based on firsthand experience (particularly strong in Brydon Smith's essay). Reference to photographic documentation is less convincing when the authors try to make points about visual effects. The usefulness of this volume is greatly enhanced by the full-page color illustrations and the back matter, which includes documentary photographs in a chronology, a selected bibliography, two interviews, and an autobiographical sketch by the artist. The first 200 pages of Dan Flavin: The Complete Lights, 1961-1996 are identical to the simultaneously published exhibition catalog Dan Flavin, A Retrospective. What is remarkable here is the addition of a meticulously researched, 200-plus-page catalogue raisonne, chronologically enumerating all of this artist's works. Each entry is a mini research project in itself: small illustrations, lists of exhibitions and bibliographic citations, notes on fabrication and edition numbers as well as short explanatory texts. Given the off-the-shelf quality of Flavin's hardware, the short-lived duration of many of the installations, and the multiplicity of editions, this provides satisfyingly comprehensive coverage of the entire oeuvre. With rare exceptions (one installation at the former New York Cultural Center in the mid-1970s is not listed), this is the most definitive list possible, with virtually every major and minor object, proposal, and installation included. Although this volume is expensive, the list provides a quantitative resource that can be sorted to draw conclusions about both artistic choices (forms, typologies, titles, etc.) and extra-aesthetic issues such as collecting patterns, patronage, and the myriad ways in which scores of individuals and institutions make up the geography of contemporary art. ^BSumming Up: Highly recommended. Retrospective: Upper-division undergraduates through professionals. Lights: Graduate students through professionals. R. J. Onorato University of Rhode Island