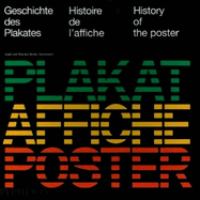 The book presents a richly extensive collection of posters, ranging from the late nineteenth century to the early 1970s, when the book was published for the first time. Conceived, written and designed by one of the best and most influential poster designers of the twentieth century, the book defines the nature of a poster and indicates the laws of designing it. The authors define and describe four fundamental conceptions of the poster, analysing the function-type of each and presenting an array of methods used to capture the attention of the viewer.

The authors employ sure aesthetic judgement in their selection of images as the reader is guided through the formation and evolution of style, emphasis and connotation in poster design. This reprint has not tampered in the least with the original edition's design or layout - staying true to Müller-Brockmann's original and immortal concept.

Josef Müller-Brockmann (1914-96) was a leading authority on graphic design and a master poster designer. His work is characterized by minimalist clarity and intense composition. Based in Zurich, he lectured extensively and was the author of many books, among them the hugely influential Grid Systems in Graphic Design (1989).

Shizuko Müller-Brockmann (b.1934) worked with her husband on a number of projects and was lecturer in Visual Design at Kyoto Kyoiku University. She also worked as a freelance graphic designer throughout her career.