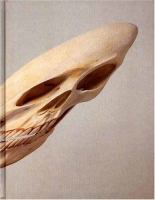 Note: Published on the occasion of the exhibition at the Virginia Museum of Fine Arts, 25 October 2003 - 4 January 2004.
Total reservations: 0

Already familiar to viewers of the 2002 Whitney Museum Biennial, Robert Lazzarini is an American sculptor whose work combines extreme realism with extreme distortion. Combining advanced digital technology with traditional sculpting methods, Lazzarini recreates familiar objects to scale out of their original materials, while deforming them in seemingly impossible ways. Appearing to expand and contract as viewers shift vantage points, the works seem to collapse upon themselves or, in the artist's words, "slip toward their own demise." His beautiful yet unsettling works address the physical, psychological, and emotional implications of this distortion.

This first publication devoted to Lazzarini's work coincides with his first solo museum exhibition, organized by the Virginia Museum of Fine Arts and scheduled to open in November 2003. The book surveys his major work from 1997 to the present, including his two most widely recognized pieces: the installation of four skewed skulls in "BitStreams" (2001) at New York's Whitney Museum of American Art and the warped payphone from the 2002 Whitney Biennial.

Designed by the artist, Robert Lazzarini is envisioned as an exhibition in book format, including spreads that create unique visual spaces in which to present the work. With an essay by John B. Ravenal describing Lazzarini's creative process and how his objects relate to the histories of perception and distortion in art, this publication will fascinate all who appreciate and study contemporary art.

Published on the occasion of the exhibition at the Virginia Museum of Fine Arts, 25 October 2003 - 4 January 2004.

Born in 1965, Robert Lazzarini is considered among the most important young American sculptors working today. John B. Ravenal is Curator of Modern and Contemporary Art at the Virginia Museum of Fine Arts in Richmond.