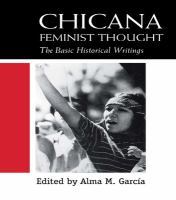 Chicana Feminist Thought brings together the voices of Chicana poets, writers, and activists who reflect upon the Chicana Feminist Movement that began in the late 1960s. With energy and passion, this anthology of writings documents the personal and collective political struggles of Chicana feminists.

Description based on print version record.

Alma Garcia is Professor of Ethnic Studies and Director of the Women's Studies Program at Santa Clara University.