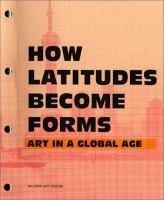 ; Fondazione Sandretto Re Rebaudengo per l'arte

The rise of globalism has created tremendous challenges to old economic, political, and cultural paradigms, changes that are increasingly reflected in diverse artistic practices across the planet. If disciplinary boundaries are now crossed as easily as geographic ones, how does the new internationalism that we are facing affect aesthetics and artistic production? Is there a link, for example, between the rise of video works and the global availability of digital media? Does the global information age facilitate an international language of art and an alternative reading of history, from art history toward art histories? From the perspective of a museum of modern and contemporary art--a purely European construct--the art institution has to overcome a major contradiction, one that exists between its mission of permanence and its mission of change. To invite and encourage such dialogue, How Latitudes Become Forms looks at current scholarship on globalism and changing curatorial practices, and identifies critical models provided by artists themselves, featuring thought-provoking essays and conversations by curators, critics, and cultural programmers from across the world, as well as multidisciplinary artworks by more than 40 artists from Brazil, China, India, Japan, South Africa, Turkey, and the United States. Including conversations with Cuauhtemoc Medina & Vasif Kortun, Kathy Halbreich & Vishakha Desai, Steve Dietz & Raqs Media Collective, Philip Bither, Baraka Sele and Philippe Vergne.