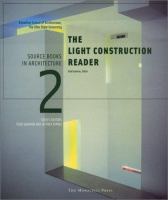 The exhibition "Light Construction," held at New York's Museum of Modern Art in 1995, maintains a lasting influence on contemporary architecture. Architects represented in the show, such as Steven Holl and Toyo Ito, continue to win prestigious commissions. Others, such as Herzog and de Meuron and Frank Gehry, have risen to celebrity status with the completion of competition-winning designs for the Tate Museum, Bankside, in London and the Guggenheim Museum in Bilbao. These works share a taste for glass, perforated metal, and other transparent materials. In bringing together the work of these diverse architects, "Light Construction" raised crucial questions about the role of materials, the nature of architectural effects, and the legacy of modernism. The second volume of the Source Books in Architecture series,The Light Construction Readeris an ambitious collection of thirty-eight essays that explores the themes and issues surrounding this important exhibition. Included here are essays by exhibition curator Terence Riley as well as noted architects and critics such as Peter Eisenman, Anthony Vidler, Greg Lynn, and Robin Evans. The complete transcripts of the Light Construction Symposium, held at Columbia University in conjunction with the exhibition, are also included. Colin Rowe and Robert Slutzky's widely influential essay "Transparency: Literal and Phenomenal" is presented here for the first time together with its lesser-known sequel of 1971. Also represented are Italo Calvino, Jacques Derrida, Jean Starobinski, and many others.

A collection of 28 essays that explore themes and issues surrounding the 1995 exhibition "Light construction", held at the Museum of Modern Art, New York.

Jeffrey Kipnis is associate professor of architecture at Ohio State University. He was formerly the director of the graduate design program at the Architectural Association in London.