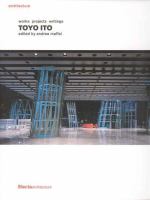 The Architectural Documents series sees the publication of the first monograph on one of the most extraordinary figures on the contemporary architectural scene, Toyo Ito of Japan (b. 1941). Since the 1970s Ito has been carrying out research into building materials, light and space, research which has led him to design buildings that he himself has defined as "non material": aerial structures, fluid and permeable spaces which avoid rigid compositional geometries. Over the years Ito has gradually simplified his language, and his work, the structure of which has increasingly lost importance, can be studied as a series of variations on the layering of the facade. His obsession with lightness and transparency are expressed to the full in the most important work of his creative career, the Sendai Mediatheque (1995-2001). This book, with an exceptional body of illustrations, presents the Japanese architects most significant projects, starting with the Aluminium House of 1970-1 through to the most recent project for the Mahler 4 office block in Amsterdam (2000-1). The appendix includes a complete list of Toyo Ito's works, a selection of his writings, as well as a biographical summary and up-to-date bibliography.