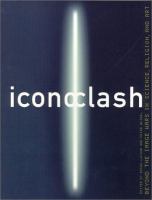 Note: Published on the occasion of the exhibition held at ZKM, Karlsruhe, 4 May - 4 Aug. 2002.;
Subtitle from cover and half-title.Note: Includes index. Language: Translated from the German.
Total reservations: 0

This book, which accompanies a major exhibition at the Center for New Art and Media (ZKM) in Karlsruhe, Germany, invokes three disparate realms in which images have assumed the role of cultural weapons. Monotheistic religions, scientific theories, and contemporary arts have struggled with the contradictory urge to produce and also destroy images and emblems. Moving beyond the image wars, ICONOCLASHshows that image destruction has always coexisted with a cascade of image production, visible in traditional Christian images as well as in scientific laboratories and the various experiments of contemporary art, music, cinema, and architecture. While iconoclasts have struggled against icon worshippers, another history of iconophilyhas always been at work. Investigating this alternative to the Western obsession with image worship and destruction allows useful comparisons with other cultures, in which images play a very different role. ICONOCLASHoffers a variety of experiments on how to suspendthe iconoclastic gesture and to renew the movement of images against any freeze-framing. The book includes major works by Art & Language, Willi Baumeister, Christian Boltanski, Daniel Buren, Lucas Cranach, Max Dean, Marcel Duchamp, Albrecht DÜrer, Lucio Fontana, Francisco Goya, Hans Haacke, Richard Hamilton, Young Hay, Arata Isozaki, Asger Jorn, Martin Kippenberger, Imi Knoebel, Komar & Melamid, Joseph Kosuth, Gordon Matta-Clark, Tracey Moffat, Nam June Paik, Sigmar Polke, Stephen Prina, Man Ray, Sophie Ristelhueber, Hiroshi Sugimoto, and many others.

Subtitle from cover and half-title.

Translated from the German.

This massive catalog documents an exhibition on iconoclasm, i.e., the deliberate destruction of images, at the Center for Art and Media in Karlsruhe, Germany (May 4-August 4, 2002). Edited by Latour, a Paris-based author and professor of sociology, and Weibel, director of the center, it is both fascinating and exhausting. The works included span art history from Goya to Duchamp to video artist Nam June Paik and more, while the contributors are an international collection of curators, art historians, and other academics. General readers will find the complexity of the language daunting, and only those sincerely interested will pursue the arguments presented here. But the questions raised-why is the urge to destroy images, in the name of religion or politics, so powerful? conversely, why is the urge to create images more powerful than iconoclasm? and how can we better understand the cycle of fascination, repulsion, and destruction that obsesses iconoclasts?-make for compelling reading. This volume contains so much more than the exhibition itself that readers may find it difficult to perceive the contours of the original, and the work is best understood as a standalone, far more than merely documenting the exhibit. For libraries collecting on art theory.-Michael Dashkin, PricewaterhouseCoopers, New York (c) Copyright 2010. Library Journals LLC, a wholly owned subsidiary of Media Source, Inc. No redistribution permitted.