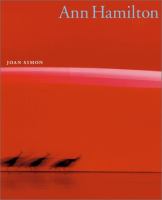 Internationally acclaimed artist Ann Hamilton creates sensory environments filled with huge quantities of material substances - 10 tons of Linotype slugs, 750,000 pennies (the budget of a project, translated into the smallest monetary unit and laid into a skin of honey), 48,000 blue work pants and shirts. In the last decade, Hamilton has increasingly incorporated sound, video, and audience interaction in a way that aligns her more closely with performance artists such as Laurie Anderson than with traditional sculptors. Her multimedia works have been widely exhibited - from The Museum of Modern Art to the Venice Biennale - and she has been awarded MacArthur and NEA Visual Arts Fellowships. Her process-oriented installations, perhaps more accurately called tableaux vivants, are so particular to their sites that, after their initial showing, they survive only in photographs, sketches, and other descriptive documents. This book, the first major volume devoted to Hamilton's work, thus will be the only complete documentation of all of her temporal projects, as well as her photographs and early textile art.

Hamilton's site-specific, multimedia installation pieces involve stunning arrangements and quantities of materials: a room lined with small canvas dummies, a table spread with human and animal teeth, or a floor covered in a "skin" of pennies and honey. These major works of art are almost always space- and time-sensitive, making this first comprehensive book on Hamilton, a MacArthur Fellow and internationally exhibited artist, all the more necessary. The former managing editor of Art in America and author of catalogs on numerous contemporary artists, Simon combines biographical information and interviews with discussions about the making of these pieces as well as their meaning. Her inviting introduction offers a succinct discussion of installation art, both in general and in relation to Hamilton's work, followed by a chronological presentation of her pieces. Meticulously illustrated with 300 photographs, this section begins in 1981 and ends with the now-running "mercy," a collaboration with Meredith Monk. The back matter, which is just as carefully planned and executed, includes a biographical chronology, a selected exhibition history, and more. Even those with little background in installation will gain access to the genre through the gorgeous photographs and in-depth text. Essential for all libraries with collections in contemporary art. Carolyn Kuebler, "Library Journal" (c) Copyright 2010. Library Journals LLC, a wholly owned subsidiary of Media Source, Inc. No redistribution permitted.