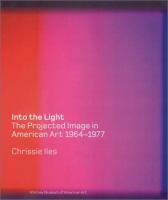 Normal view MARC view ISBD view
Into the light : the projected image in American art 1964-1977 / Chrissie Iles; with an essay by Thomas Zummer.

The incorporation of large-scale moving images into art installations has a rich history, this text accompanies the exhibition exploring this theme. It reconstructs 19 classic works in film, video and slide installations from the mid-1960s through the mid-1970s. These projected installations created a new language of artmaking, centered around an exploration of physical and psychological space.

This valuable contribution toward understanding American art of the Sixties and Seventies focuses on a less well-examined subject: artists' use of projected film and video to produce dense, multilayered installations that probe fundamental questions of identity and the nature of language, society, and art in a world of machine-made images. The tone is academic, and, while attractive, the design of the book (which accompanied a recent exhibition at the Whitney Museum of American Art in New York) could have been more effective in conveying the impression that these works make on those who see them in person. The essays (by Iles, curator of film and video at the Whitney, and Thomas Zummer, an independent scholar, curator, and artist) provide an excellent introduction to the theoretical underpinnings of the art, but they do not take on the historical or social context in which it was created. The fine bibliographies on each of the artists cover the 1964-77 period only. Given the dearth of materials on this active medium and the excellent quality of the essays, this is recommended for libraries serving students and scholars of film, video, performance, and conceptual art. Michael Dashkin, PricewaterhouseCoopers, New York (c) Copyright 2010. Library Journals LLC, a wholly owned subsidiary of Media Source, Inc. No redistribution permitted.

A companion to the Whitney Museum of American Art exhibit of the same name, Into the Light: The Projected Image in American Art 1964-1977 is the first documentation of the ephemeral but influential films, video sculptures and projected installations of the period. Works featured in the book include Lupe, Andy Warhol's film about the suicide of actress Lupe Velez; Robert Whitman's installation Shower, in which an image of a woman taking a shower is projected onto a shower stall with running water; and Yoko Ono's Sky TV, a video sculpture in which a camera is aimed at the sky and the images televised in the gallery. Photographs of the pieces are accompanied by detailed explanations of how they were originally projected. (c) Copyright PWxyz, LLC. All rights reserved